The historical list of directors of the state-owned enterprise as in office since its establishment to the present. The current CEO is Ing. Ján Jurica, installed in the office in 2009. 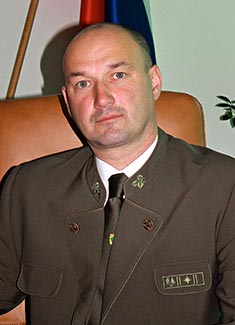 Ing. Drozd introduced major organization changes. On 1st July 2004 a new organization unit Branch office Pliešovce was created by joining all managing companies. There were investments into reconstructions and maintenance of buildings, roads and machine pools. The funds for necessary works and purchases were raised by selling surplus state property. The sales were approved by founder of MFE, that is, the Ministry of Defence of the Slovak Republic. AdditionalServices for commercial hunters offered by the corporation grew even better. A new unified information system was implemented and deployed in all organization units. More than considerable sums were invested in order to create suitable conditions for field employees. Modern electronic procedures were implemented to register the amount of wood and map materials. The staff were equipped with vehicles, and they were allowed to use them for business and for private purposes. Vehicles were purchased on HP (hire-purchase); subsequently, the employees were offered to buy the vehicles off.

Ing. Drozd changed the demarcations of individual military districts, and subsequently sold the corporate flats to employees of MFE transferring it into their private ownership. Organization structure was changed once again on 1st July 2007. The Branch Office Pliešovce was transformed to Forest Management with the seat in Vidov Vrch managing also the agricultural production. By then, the organization structure was as follows: Branch Offices Malacky, Kežmarok with the seat in Podolínec, Kamenica nad Cirochou and Forest Management Pliešovce with the seat in Vidov Vrch. 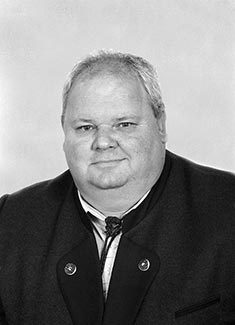 His executive period was marked by significant organization changes in the corporation. He continued the trends set by col. Ing. Ulianko. 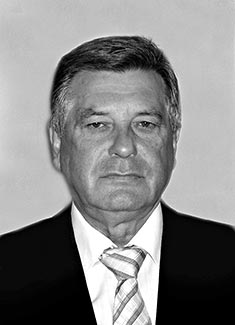 Col. Ing. Jozef Ulianko held the position of Director General from 1st April 1987 to 31st December 1992. On 1st January 1993, he became the very first Director General of Military Forests and Estates of the Slovak Republic, a state-owned enterprise, Pliešovce, which he actually brought to life. He held this position to 31st January 1998.

In the late 80s of the 20th cent., the company was one of the best in the Middle –Slovakia region. They produced 55m3 of paper pulp per year and 5.3k m3 of lumber; agricultural products worth more than 23 mil. Czechoslovak crowns (Kčs); 420 tons of carcase meat; 3.2 mil. litres of milk; 6.3 tons of sheep wool and 20.3 tons sheep cheese, and 520 tons of crops. In addition, the company carried out landscaping works worth more than 4.3 mil. Kčs per year. They employed 970 employees full-time and 90 employees as season-workers. They were a very significant employer in the region at that time. All those numbers manifested economic efficiency and prosperity of the company, and signified bright and exciting future.

Military Forests and Estates of the Slovak Republic, SOE, was founded after the splitting of Czechoslovakia in 1993. It was established by a Certificate of Incorporation on 30th December 1992. The Certificate was signed by MO col. Gerinec, a plenipotentiary of the Government of the Slovak Republic. Much credit for the foundation of the company goes to col. Ing. Jozef Ulianko, a contemporary Director General in Pliešovce. MFE of SR exists with only a few minor organization changes up to day, and that is mainly due to his excellent work and the work of his closest colleagues. The company was established in order to fulfil the needs of efficient and ecological forest and agricultural management in military training area (MTA) of the Army of the Slovak Republic. The company used to manage 72 800 ha of forest land and produced approximately 300 000 m3 of lumber. In the time of its foundation, the corporation consisted of three branch offices in Malacky, Kežmarok and Kamenica nad Cirochou. The Directorate directly managed three of its agricultural management companies, three forest management companies, a construction management company and a logistic company. 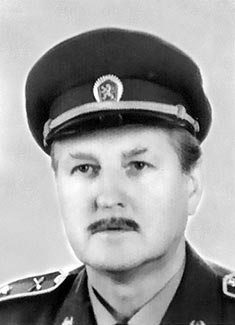 Lt. Col. Ing. Jozef Švec was appointed Director General on 1st January 1971. Prior to that, he held the position of a Managing Director for Construction and Planning in a MFE Banch Office Kamenica nad Cirochou. He served as Director General until his retirement on 31st March 1987.

On 1st January 1977, the Directorate overtook the control of joint farming company (JFC) Pliešovce and transferred it to Agricultural Management Pliešovce. In the period of the 70s and 80s, the majority of Directorate investments were allocated to agriculture; the agricultural industry was in bloom. 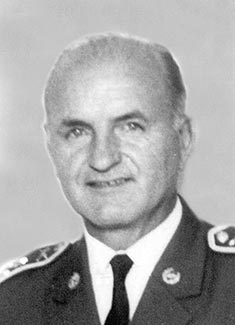 Lt. Col. Jozef Naništa was appointed a Director General in Pliešovce on 1st January 1959. He served at this position until 31st December 1970.

Re-cultivation of MTA Lešť was stopped by the coming of the Soviet Union united army and their intensive military activities. The mission of FMC Lešť and its future as such had to be reconsidered. Due to this situation, the management of Lešť founded a Plant Nursery Centre in 1970. The Centre was intended to improve working and living environment in individual MFE companies. Later on, the Directorate decided to join Re-cultivation Management and the Centre into a new department of Cultivation and Remediation Management Pliešovce with a seat in Malá Zábava. 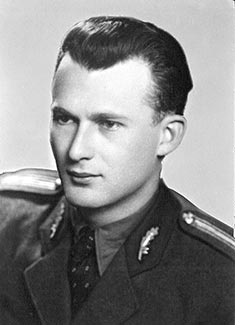 Capt. Ing. Ernest Pápay was appointed corporate director on 1st September 1956. Prior to that, he worked for the company at the position of the Managing Director for Construction and Planning.

During his executive period, he ordered to start construction works of the office building of MFE corporate headquarters (CH) and three block of flats. The buildings were put to use late in 1957 (and are in use up to these days).

On 24th June 1957, there was a huge wind calamity in the forests. It damaged 110 000 m3 total; Lešť Forest Management Company lost as much as 82% of forest cover. Calamity disposal works were only finished late in 1959. Other MFE branch offices were of great help at that time.

There was a change in management on 31st December 1958; director general and division directors were removed from their offices. Capt. Ing. Ernest Pápay, former director general, was appointed a Managing Director of the MFE Branch Office Malacky. 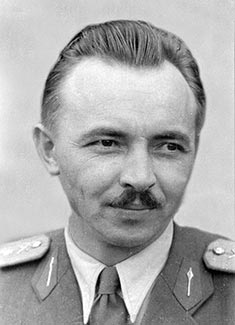 The first director of Directorate General. The Directorate was founded on 1st July 1952, after splitting from headquarters in Malacky.

Under his management, the company was transformed from a forest management company to corporate headquarters with decent organization structure. On 31st December 1955, the number of employees was approx. 580, including 64 members of technical and administrative staff. The company had no housing or production facilities. Means of mechanization allocated to the company from sister companies of MFE were considerably worn and would frequently break down. Their reparation must have been provided in private car repair shops.

Despite those difficulties, in 1953, the company succeeded to fulfil all tasks as planned. As a result of taking over new land units, the land had to be categorized into individual categories. With the help of members of Institute of Forest Management MFE - Stavotax Praha, they started the categorization late in 1955. As the company had no housing facilities, construction works of eight block of flats had begun in 1954. The flats were finished and put to use in March 1955.

Capt. Miloslav Balažic died while on a business trip, in a tragic train crash on 8th August 1956.

Caring for our future. The principal activity of Military Forests and Estates of the Slovak Republic, SOE, is the wildlife and forest management.

Military Forests
and Estates of the SR, SOE

The company was established to saturate the needs for the efficient and ecological forest and agricultural land management on the military training areas in Slovakia. The state owned enterprise consists of Directorate General and three branch offices in Malacky, Kežmarok and Kamenica nad Cirochou.